This simple story can be helpful when you have to deal with someone who has a tendency to stress you out and there is no escape. This is the Barking Dog Illustration:


Two men live in on opposite sides of an empty lot. Both men worked late the night before and they are looking forward to getting some rest on their day off but there is a dog in the empty lot between their homes. The dog is running around and barking incessantly and the owner is nowhere to be found. 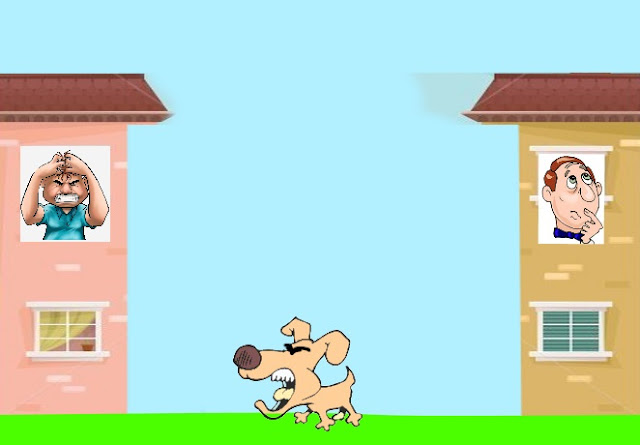 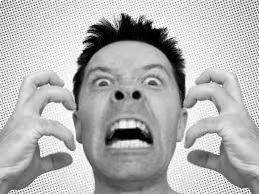 The second man on the other side of the lot also hears the barking and he feels annoyed too. This man, however tells himself: “It’s just a dog and that’s what dog’s do: they bark – How can I get mad at the dog for barking?” This man has a rough time sleeping too, but not nearly as much as the first man. Instead of getting more and more heated over the situation, this man focuses on how he can endure the situation as best he can until it’s over. He doesn’t blame the dog for barking, because after all, that’s what dog’s do. Unlike the first man he is able to get some rest even though it was a challenge.

In the end, both men had a rough time, but who probably felt worse the next day? – Obviously the first man who got angrier and angrier while obsessing about the dog for barking had a much harder time. His anger at the dog for barking just made things worse for himself.

So what’s the moral of the story and how can we make application in real life? All of us have to deal with people in our lives who get on our nerves, get under our skin, and say irritating things. Sometimes we find ourselves stuck in situations with people who cannot help but annoy us. Perhaps it is your miserable complaining coworker, or your irritating sister-in-law, or your judgmental neighbor, or your friend’s opinionated obnoxious significant other, who you find it really hard to be around because you just don’t like most of what comes out of their mouth and they never seem to change. Perhaps you tried being assertive and standing up for yourself in the past, but with the kind of people we are talking about in this illustration, those efforts just do not work. Some people just are the way they are and there is nothing we can do to change who they are.  These people are the “barking dogs” in your life.

When you are around these challenging people in your life who you know irritate you and there is no escape, ask yourself: Are you going to be like the first man in the illustration of the barking dog and allow yourself to keep getting angrier and angrier the more that person says things you don’t want to hear? Are you going to keep increasing in your level of frustration as the person acts in the irritating way you expected them too in the first place?

Or, the next time you find yourself stuck, with no escape, are you going to be like the second man in the illustration who viewed the barking dog for just what it is, as a barking dog and no more? When you are trapped in a situation around a person in your life who qualifies as a “barking dog” you can work on enduring having to listen to that person, while accepting the fact that getting angry does nothing to change that person or the situation.  Instead for as long as you are stuck in the situation, that person’s annoying words, complaints, opinions, etc. can just be dismissed in your mind as barks from a dog. Just as it is pointless to get mad at a dog for barking, it is just as useless to get mad at an annoying person for being annoying, or an opinionated person for being for being opinionated, or a chronic complainer for complaining. It is just who they are.  Bark-Bark-Bark 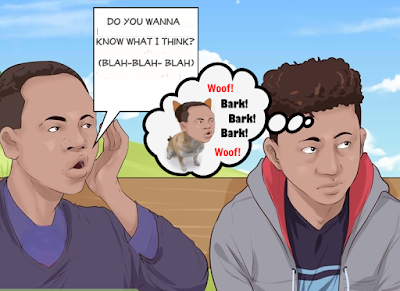 Do you ever find yourself in situations where you find yourself stuck around a person that you just don’t like listening too, that never seems to change?  See examples:

“When I visit my grandmother she nags me incessantly even though I have asked her a dozen times to ease up with it, and it drives me crazy” or...

“When I work a shift at work with so and so, she spends the whole day grumbling about how bad her life is and I can’t stand it but there is no escape until it’s time to go home”

What is one of your “barking dog” interpersonal situations?

How can you cope?

“A nightingale does not stop singing its beautiful song at the intrusion of an annoying woodpecker.”
― Suzy Kassem