Three Paths: An Effective Way to Answer the “Is Marijuana a Gateway Drug” Question

“Is marijuana a gateway drug?” – Any substance abuse counselor at this point is probably sick of hearing that redundant and often misleading question. The following explanation is time-tested, reasonable and easy to understand for just about everyone. See for yourself:
First, just in case there is anyone out there who doesn’t understand the question: “Is marijuana a gateway drug?” – Here is clarification of what that question means, starting with the definition:
Gateway - allowing entry, access, or progress to a more extreme form: gateway drug,
Therefore, viewing marijuana as a “gateway drug” would indicate that a person who starts using marijuana first will eventually end up using “harder” (more severe and dangerous) drugs at some point (such as cocaine, benzos, heroin, etc.) 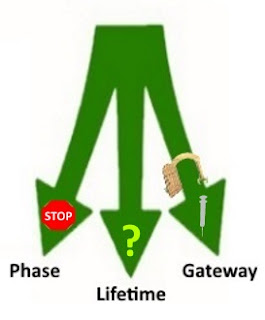 The truth is that there are many factors that can contribute to an increased likelihood of addiction including genetic predisposition, various psychological and emotional factors, age of onset, trauma history and many other factors which can be beyond an individual’s full control. These factors in combination often play a much larger role with regard to which one of the three paths one follows, as opposed to just choice alone dictating the answer. If the path an individual followed was only dependent upon choosing wisely then very few people would become addicted to drugs like heroin and crack, starting from marijuana, because few if any people would ever deliberately choose that painful path. So the conclusion to the marijuana gateway discussion in short is that there are three paths one can take when using marijuana, however not everyone gets to choose the outcome.
Key Points:
Ø  Thankfully, most people who smoke marijuana never move on to becoming addicted to harder drugs.
Ø  However, some marijuana smokers, in spite of their best intentions, will in fact become addicted to more severe drugs at some point sooner or later.
Ø  There are many factors that can play a role with regard to the marijuana gateway drug phenomenon including genetics, trauma, family, social and emotional factors, therefore choice alone does not determine the outcome. (A young person simply saying “I will never move on to harder drugs” by itself not enough to prevent that from occurring)
Printable version click here -

Click here for extended version of this information for group discussion

www.takingtheescalator.com
Posted by Taking the Escalator at 11:05:00 PM No comments: