The subject of honesty comes up frequently in any substance abuse program. That is most likely because lying and dishonesty is so closely tied to the behaviors associated with addiction. Even after someone might stop using and get clean, being honest can still be a challenge. The key to learning to be honest on a consistent basis has a lot to do with the important concept of integrity

Integrity - the state of being whole, entire, or undiminished – www.dictionary.com 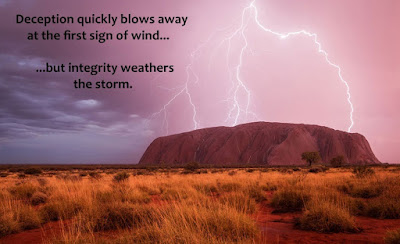 When you are “whole” you are undivided, in one piece, complete.  Dishonest people are fractional, broken, and divided. If honesty is the destination, them integrity is the road that brings you there. If you think about it, it is a lot easier to tell the truth when you haven’t done anything that you feel the need to lie about.  Similarly, the negative choices of today may easily become the lies of tomorrow.

So keeping mind that striving to live with integrity is challenging but worth the effort, try to complete the following integrity related sentences with your own thoughts and discuss your answers with others:

A time in past when it was important for me to take a stand was….

An aspect of my life today which I will not compromise is….

When someone entrusts confidential information to me I…

I earn the trust of others by…

Choosing the path of integrity may not be easy but it is always rewarding.

Posted by Taking the Escalator at 8:50:00 PM No comments:

Developing a healthy sense of responsibility is critical to the change process. It can be difficult to walk that thin line between reasons and excuses. Although both reasons and excuses are similar, there is one glaring difference. Reasons by nature are derived from an explainable cause and are based on some kind of legitimate explanation for an outcome. Consider some examples:

Reasons can be traced to a clearly linked cause and effect type of relationship. Reasons, are in fact: reasonable. The goal of providing reasons is to explain an occurrence in a logical manner often supported by some form of tangible evidence. Reasons are derived from the realm of embracing acceptance of responsibility. Look again at all three above examples and notice the presence of an acceptance of responsibility as well as a rational, believable explanation for cause and effect

Excuses on the other hand, are also explanations, but excuses are mostly diversionary in nature. Unlike reasons which are fact-based and responsible, excuses are derived from a form of subterfuge

Subterfuge – n -an artifice or expedient used to evade a rule, escape a consequence, hide something, etc.

Excuses can be based in truth however the connection between one’s behavior and its cause can be extremely vague or distant and at times nonexistent. Valid reasons are simple to explain whereas excuses may be extremely difficult or even impossible to prove. Consider some examples of excuses:

In all three above examples, there may (or may not) be a degree of truth when it comes to explaining each circumstance however it may be impossible to prove a direct cause and effect connection. Therefore when it comes down to it, excuses cane be like a huge smoke screen clouding the ability to look at personal responsibility. In fact excuse making can be one of the biggest obstacles to making progress in life, especially when the primary focus of your energy is wasted on trying to prove that an excuse is valid. Surely life isn’t fair and the world is full of injustice; that is the truth. Therefore we all have reasons and excuses why we may have problems and misfortunes and other struggles in life. With that said, however, doesn’t it make more sense to focus on what you can do to make things better for yourself instead of practicing the useless art of making excuses, which in the end gets you nowhere?

Excuses are like counterfeit money, no matter how “valuable” they may seem to be at face value, in the end they are all equally worthless 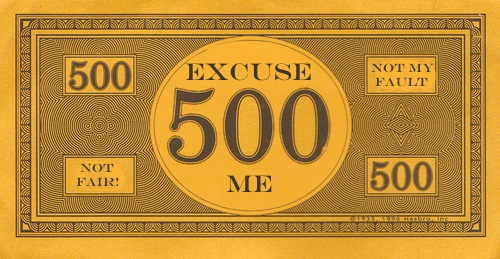 For thought and discussion:

What excuses might be holding you back from moving forward today?

In place of making excuses, what is one aspect of your life that you can increase responsibility for improving by yourself instead of just waiting for things to get better?

* A clear, printable version of this text can be viewed and printed by clicking the following link:
https://www.academia.edu/27825737/The_Subterfuge_Exclusion