There is a word out there that isn’t an official word yet and that word is Alethephobia; meaning “fear of hearing the truth”

Alethephobia is derived from alethia – meaning “truth” in Ancient Greek (http://en.wikipedia.org/wiki/Aletheia) and of course phobia, meaning an extreme or irrational fear.

This often understated phenomenon of alethaphobia has become more and more prevalent in today’s world, particularly in western culture. Since the beginning of time, the “truth” can be quite scary for anyone, especially when the real world staring us in the face isn’t so pleasant. Perhaps what has changed nowadays is that there are so many diversions from the truth and quite often these clever ways to sidestep reality are often valued and even encouraged. Don’t get me wrong, all of us, myself included, have our schemes and methods for temporarily dodging uncomfortable actualities from time to time. What has changed today, however is the increased availability and accessibility of these escapes, and the degree to which many of us are willing to use them.

To explain further, think about the past when life was much more straightforward and simple. People have always had their imagination as a means to briefly circumvent reality but usually sooner or later people in the past had to face whatever was going on in their lives. People years ago had alcohol and some drugs available, as well as television and movies, but still there was a lot less of an available cushion between the real world and one’s own fantasies and there were fewer external forms of emotional retreat for the average man and woman. Today, however, the escapes right at our fingertips are endless. We can take a virtual online vacation from emotional hardships through social media, online gaming, gambling, shopping, and a host of other diversions or vices, dependent upon how out of control they can get. For example, if you have a smart phone think about how easy it is to get lost in the world of Facebook or Candy Crush, anywhere and anytime you need to get away. In addition, nowadays there are a multitude of prescription drugs and other substances, both legal and illegal, right at our disposal, affordable and accessible for just about everyone, that aide in the escape from reality (or at a minimum take the edge off the discomfort associated with the stressful facts that we may reluctantly have to face in our lives).

The second aspect of this situation is that in many ways society has come to value escapism and evasion of reality. The bar for realism and truth is set much lower. A snappy wisecrack, comeback or counter argument uttered in response to a challenge of one’s viewpoint, morals, values, etc. is often much more appreciated than a soul-searching, insight-oriented, and introspective journey into honest self-evaluation and sincere self-correction . People’s ability to rationalize, justify, and deflect blame on others is often the first line of defense to a personal challenge rather than humble reflection, and when needed, personal acceptance. To put this in perspective, think about how often we hear of someone in the media saying “Sorry, that was my fault” or “This is my responsibility and I will do what I can to change” Its not that it never happens like that any longer, but it usually is the exception as opposed to the rule when someone gets caught, unless of course their back is against the wall. “Deny, blame or justify” is often the rallying cry of anyone caught in the spotlight.

What is the cure for alethaphobia, or fear of the truth? It all starts with our desire. As the cliché says, the truth hurts, but if there is a sincere desire to start to know the truth, and to honestly face what at times may be uncomfortable or unpleasant, only then will we set the stage for insight and awareness. For all of us, this is a daily work in progress, but the effort involved yields steady emotional and spiritual growth. 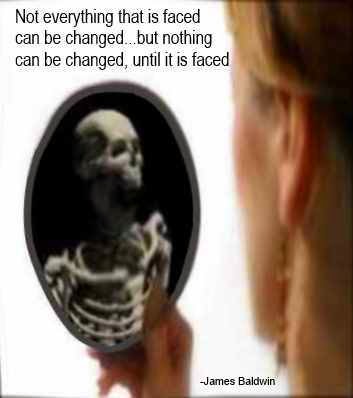 Anxiously Digging for an Answer

Everyone has had their share of “Aha!" moments in life which can be such a relief! A person can have an Aha moment when they suddenly wake up and realize that it is time to get out of a bad situation, for example. An Aha moment can occur when we suddenly find a clever new way to solve a problem that has caused us deep and often lasting stress. Clearly, Aha moments are to be greatly valued, because an Aha moment can be symbolically like finding the way out of a deep hole that we have been trapped in for weeks, months or even years.

There is a downside to the concept of Aha moments particularly for people who suffer from prolonged stress and anxiety or other mental health or substance-related issues. These days, there are so many things out there to worry about whether it be financial issues, health issues, employment problems, troubling world events, threats to safety and security, etc.; the list goes on and on. When it comes to these special Aha moments in which the light of insight and self-discovery suddenly shines down on us, thereby showing the way out, the reality is that Aha moments are usually rare and often few and far between. The vast majority of problems out there that weigh on our minds and contribute to stress and anxiety cannot be solved in a simple “Aha!” moment. Usually if there was a simple answer to a lot of the more anxiety-producing issues out there, then most of these problems would already be solved. What often can instead increase anxiety and the racing thoughts that keep people up at night is the dilemma of waiting for an Aha moment that never comes while otherwise doing little else of value to try to cope.

So what can be done instead? When you’re at the bottom of a dark pit of stress, obsession, and worry, then waiting for an Aha moment when someone symbolically throws down a ladder for you to climb out can be an exercise in futility that can perpetuate, rather than alleviate anxiety. The energy involved with overthinking and obsessing often makes matters worse, not better with time. Most of these types of problems are more about looking at what we can do, little by little, to simply start the process of climbing out. Taking it a step further, rather than anxiously waiting for an Aha moment that may never come, the simplest place to start is to open your eyes, and stop digging yourself deeper into the seemingly endless pit of anxiety and worry. 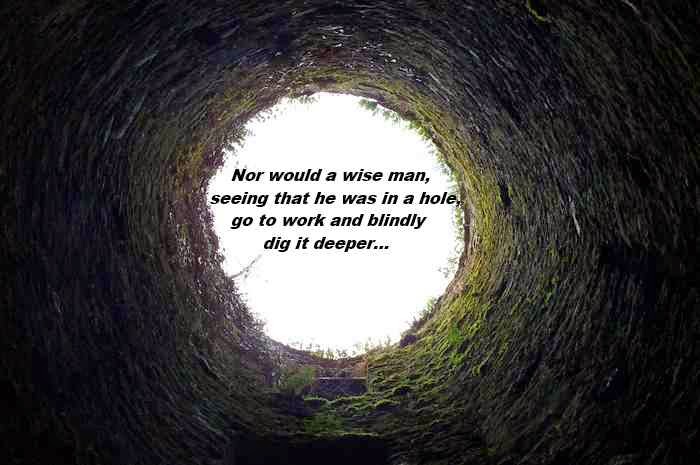 (Quote taken from The Dictionary of Modern Proverbs)
Posted by Taking the Escalator at 11:03:00 PM No comments: