Tales from a Colonoscopy

I apologize if this blog entry is a little gross but bear with me because there is a point to it. Millions today, especially in more developed countries have had the experience of having a colonoscopy. For any younger people reading this maybe you have not had one yet but at some point, just for safe-keeping your doctor sooner or later will recommend you for one by the time you are middle-aged. Most people reading this know what a colonoscopy entails so I won’t get into the details about what it’s all about but let’s just say it’s a necessary medical procedure for everyone at some point.

So I was laying in my hospital bed waiting for my turn on the doctor’s table for a colonoscopy one fine day. There was a guy next to me who I never got to see, but because we were only separated by a curtain I could hear him on his cell phone making all kinds of big plans and important decisions. I could tell he had some kind of high level position someplace impressive based on the way he was barking out commands and negotiating critical deals. All the while, he was being arrogant and rude with the nurses and other staff and he definitely didn’t care enough to keep his voice down so the other patients like myself could rest and relax. I could remember taking comfort in the fact that at this moment this big shot executive was no better than me as he too was waiting to get a tube stuck up his butt just like me. “All the money and prestidge in the world couldn’t save him from that today!” - That was one of the last things I can remember thinking before the sedatives kicked in and I fell asleep.

So what’s the lesson? In reality a rich man is just a few bad money deals away from being a poor man. A strong man is just one injury away from being disabled and physically needy. A rock star is just one bad song away from drifting off into obscurity. When you take the time to look deep inside (pun intended), really we are all pretty much the same. Rich, poor, strong, or weak, a little humility goes a long way. 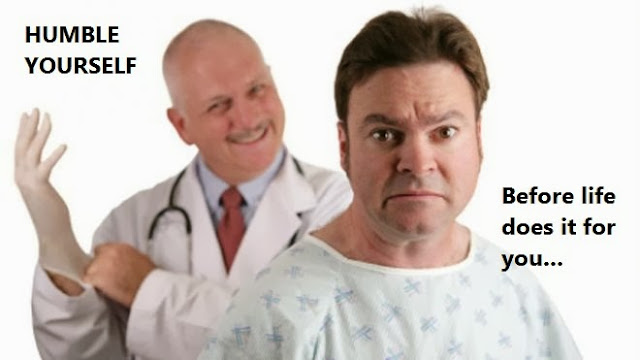