Background – So much of what impacts our life happens in this space:

The Space Between Feeling & Impulse and Words & Actions:

This original concept is attributed to Austrian neurologist Victor Frankel, who said:

Consider an Example: Larry was extremely irritated by the fact that his partner insulted the new outfit that he spent hours shopping for, in view of the upcoming party. On an even deeper level, he felt hurt as he was really expecting a nice complement from his partner like “Wow you look amazing in that new outfit!” but he didn’t get it. Larry’s impulse was to say something hurtful and insulting back in return to get even.

Larry then DID NOT take advantage of “The Space Between”

Larry let his irritation and hurt get the best of him and he let his angry impulse take over and he told his partner “Have you looked in the mirror lately yourself, you’re really putting on weight so you shouldn’t talk about looks”

You can imagine where that conversation then went as surely a big fight and argument ensued from there and it was not pretty.

Discuss: If Larry had done something different in The Space Between and then used that time to choose different words and actions, how may have things turned out better?

Some Positive Ways to Successfully Manage the Space Between

1.     Use the Space Between to Just Wait – So many problems in life can be avoided by waiting before we speak or act. Consider the following “advertisement” for the concept of WAITING 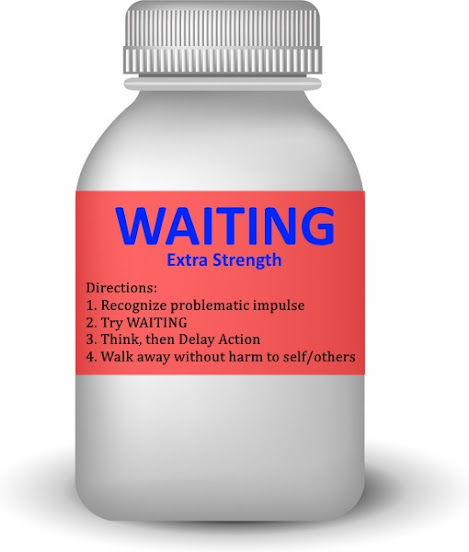 Finally, a way to deal with those pesky impulses to do stupid things that most of us end up regretting later:  WAITING – How it works:

Almost everyone from time to time gets a bad idea that may even seem good at first. Sometimes there may even be a strong impulse to just act on that idea, especially when emotions are running high or when we are otherwise feeling impetuous, distracted, desperate or overly excited. It is during those moments when WAITING does wonders. During these moments, simply try WAITING, and allow WAITING to take effect long enough for the stupid impulse to go away. Then walk away unharmed with no painful regrets, irreversible losses, or crippling guilt, ready to face another day!

Try WAITING for yourself and see the amazing results!

Proven effective for adults and safe for children and adolescents too!

2.     Use The Space Between to Put Things in Perspective

Feelings can start out strong but at times feel differently especially after we look at the broader perspective. It is helpful to consider extenuating circumstances that may be contributing to our feelings. Example below

Impulse – Tell him off, put him in his place, insult him, lash out

Put things in perspective in The Space Between – “My brother actually just found out his wife is sick so even though he is acting like a jerk; I am going to give him the benefit of the doubt and let it slide for now”

Feeling – Feeling disrespected by daughter who is misbehaving and talking back

·        Discuss – Can anyone in the group come up with a personal situation where it is important to put things in perspective before speaking or acting?

3.     Use The Space Between for Consequential Thinking

There are times when reacting a certain way may be justified but still if there are consequences involved it may not be worth it. Example:

Feeling – Disrespect, injustice, irritation, anger – This guy is complaining out loud in line at Walmart and he has a really big mouth, so someone needs to shut him up!

Impulse – Confront him, take control, take things into my own hands to shut him up myself

Consequential Thinking in the Space Between- “I am already on probation for that fight I got into last year and things are finally going well as I have not been in trouble for a while now. If I say something to this guy and he talks back to me there may be a fight. The last thing in my life I need is to get arrested again for fighting. So, never mind, I’ll let someone else deal with this loudmouth. I am just going to walk away and choose another line and get out of this place without getting involved which is for the best for me right now.

Impulse – Flirt back, see if I can get something going sexually with this person

Consequential thinking – Even though there is excitement and attraction here, this person lives with their partner and children and I’m in a relationship too. The last thing I need is drama with the neighbors. I’ll pass on this situation to avoid the trouble that will surely follow

·        Discuss – Can anyone in the group come up with a personal situation where it is important to use consequential thinking in The Space Between?

Ø  Grounding techniques – This involves simple strategies to connect us with the present to separate ourselves from emotional distress. Using your senses is one example of grounding: Feel something in your hand, listen to background noise around you (Like the birds chirping). Try to count five things you can see in your environment around you.

Ø  Praying – If this is something that works for you and you believe in, pausing for a brief silent prayer in The Space Between, before thinking or speaking can prevent regrettable decisions

Ø  Walking – Simply just getting up a taking a few steps out of a situation can buy time to reset our thoughts.

Lesson – What we do with “The Space Between” can be life changing. Successful, healthy, and happy people learn to use The Space Between their feeling/impulses and their words/actions in a positive way to avoid regrettable decisions and outcomes. What we do in that little space every day can mean so much for our future

Using The Space Between effectively can prevent us from ever having to later say the following statements:

Closing question: Come up with one or two things discussed today that you can start doing or using to effectively master The Space Between feelings/impulses and words/actions?