If your aim was to tell the world how great chocolate ice cream is, would you focus primarily on trying to convince others that vanilla tasted lousy? Most people would say “of course not” and spend more of their energy getting people to taste and experience the joys of chocolate and then go onward from there. This is kind of a silly example but it is a way to illustrate an all too common phenomenon in today’s world. What I am talking about here is the tactic of trying to convince others of one’s opinion simply by breaking down opposing viewpoints. Consider some real life examples:

>The sports fan who spends the majority of the game taunting the other team’s fans and telling them that their team sucks instead of focusing on rooting for and supporting his own team.

> The politically inclined person who constantly breaks down the opposing party’s policies     and decisions in an effort to ty to prove them as foolish or misguided, while never really making a reasonable case why his own political viewpoint is helpful or beneficial to society.

> A person who develops a methodology for helping others with some kind of personal struggle (such as an addiction or mental health issue) that in reality is just based on poking holes in existing methods by explaining why they may not work, while instead neglecting to clearly outline another course of self-improvement that really does work.

>A person who spends time making fun of or undermining others beliefs (such as religious or other spiritual beliefs, for example) while remaining vague and unclear with regard to a better explanation as to why their own beliefs might provide an improved framework in the ongoing search for meaning and purpose in life.

Of course there is value in challenging and questioning established beliefs, methods, ideas, viewpoints, etc., that we may not agree with. Many things can be learned by objectively cross-examining, testing and carefully scrutinizing opposing sides to the story. Nevertheless, the point being made here is that one’s primary objective should never be to break down others but rather it is so much more useful to build up. I am a firm believer that if a person’s principal mode of teaching, convincing, or persuading others of their viewpoint is based on criticism and generating doubt then that is a red flag when it comes to deciding if this is a person worth listening too for any extended period. Because once the criticism, disparaging and denouncing is all done then the real question is, what is left? In other words, if the main focus is all about tearing down over and over, then in the end, aren’t we all just left with a pile of rubble at our feet and nowhere else to go? Instead, questioning, challenging, investigating, protesting, and confronting viewpoints and beliefs that we do not agree with should be counterbalanced. What so many of us are really searching for is a healthy dose of encouragement, instruction, guidance, enlightenment, and coaching toward healthy alternatives that brings with it a tangible hope for something better. 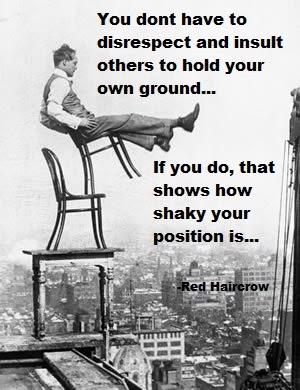 www.takingtheescalator.com
Posted by Taking the Escalator at 11:57:00 PM